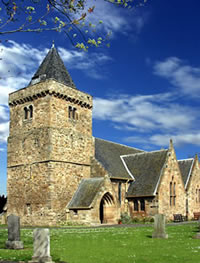 Aberlady Conservation Society was established as a community-based conservation and history society in 2001. The village is one of the prettiest in Scotland. Its appealing historic core has changed relatively little over the years.

Its ubiquitous ‘loupin’ on stane’, mercat cross and high-steepled kirk combine with poppy-speckled fields of golden wheat, hull-encrusted sandbanks and towering skies to instil a deep sense of space and pastural timelessness in visitors new and old.

Situated on the bay which takes its name, Aberlady offers spectacular vistas across the saltmarsh to the high sand dunes beyond. The freshness of the bird (and trill) – filled air, and its rare flora, fauna and geoological features make the bay one of Scotland’s best kept secrets. It is of international importance and a Site of Special Scientific Interest (SSSI).
Aberlady was a mecca for tourists during the Edwardian era, when families would move here for entire summer seasons. Today, while modern-life has undoubtedly left its mark, the village retains its characteristic features.

The remit of the society is to help protect and conserve the built and natural environment of the village, while also researching and promoting its history. Aberlady boasts rich archaeological and historical evidence of occupation since prehistoric times.

“It seems to be a characteristic of the place that, when a family once settles here, it remains until it finally becomes extinct.”
J. P. Reid