Skip to content
Home » East Linton and its Artistic Heritage 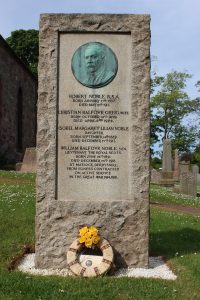 East Linton has a long tradition of landscape painting. The picturesque Burgh offered many appealing aspects. The River Tyne especially, flowing slowly between tall sparalling willow and then surging through the Linn jaws, past ancient mills, colourful orchards and golden fields, provided painting subjects for which there was a ready market.

Little wonder that by 1906 had become known as the Scottish Barbizon, comparing it to the French village in the Forest of Fountainebleau.

This excerpt from the Local History publication By the Linn Rocks demonstrates the contribution of many significant artists to recording the East Linton environment. Examples of some of the paintings can be seen in East Linton library including the painting by Robert Noble, RSA ” East Linton at Dusk.” A more recent artist of note was Ken Lochhead, well known for his paintings of Scottish scenes reproduced in notelets and postcards.

The tradition continues today with an Art Club which meets during the winter months and an Annual Art exhibition held during September each year. The picturesque Preston Mill, now in the care of the National Trust for Scotland, continues to attract artists and photographers for its historic beauty.

After months of planning, an exhibition to mark the mark the centenary of Robert Noble’s death in May 1917 opened in the John Gray Centre in Haddington on the 12th May 2017. A publication on the exhibition was produced by a Local Working Group with two significant articles by Duncan Macmillan and Alexander Moffat.*  Two detailed archive files compiled by the late Roger Durman have been deposited in the John Gray Centre Archives Haddington. They contain a considerable amount of information on Robert Noble’s early family life his link with James Campbell Noble RSA, his cousin, who was eleven years older and information on his artistic legacy.

Roger published an account of the life of Robert Noble in East Lothian Life in 1995. An update on that article by David Affleck was published in the East Lothian Life edition of  September 2016. Links have been made with Kirkcaldy Art Gallery and research is being undertaken to learn more about his wife, Christian Greig or Noble.