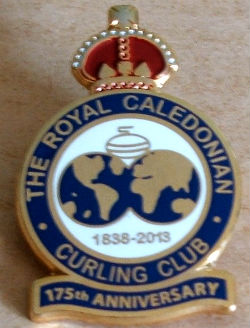 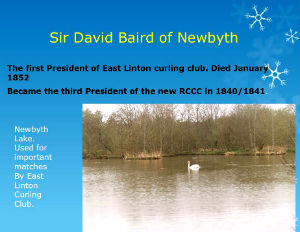 The first President was Sir David Baird of Newbyth and there are several references to matches being played on Newbyth lake. An account of his life has now been published in East Lothian Life Issue 94, 2015.
After Sir David’s death, three generations of the Buchan Hepburn of Smeaton family held office as President. Sir Archibald Buchan Hepburn played a significant role in the establishment of Haymarket Ice Rink in Edinburgh in 1911. The family ceased to have links after the estate was sold in 1934.

Andrew Howden was a tenant farmer on Tyninghame estate and joined the club in 1841. In February 2008, an 18th century curling stone with a prominent H was located which had been acquired by its present owner from a pond at Lawhead farm. It provides a real link with the formation of the club but also poses the question as to what its own history was before 1841!

Sir David Baird died in 1851 after an accident but the Baird family continued to host matches in the immediate years after that tragedy and his widow continued as Patroness. Smeaton Lake, which was created by the Buchan-Hepburn family from a peat bog between 1820 and 1830 became the main venue for the club after 1853.
The East Linton club is one of the largest in East Lothian playing most of its club games at Murrayfield Ice rink in Edinburgh.

The last outdoor Curling game on Smeaton lake was in January 1982.

East Linton Club now plays at Murrayfield , the curling rink of the Edinburgh Curling Club. A History of the Club has now been compiled ( June 2017)

In 2010, on the 24th December, Inspection of Smeaton lake suggested that there could be a game on the lake on Boxing day. Christmas Day was ruled out. Here is the President at that time clearing snow and testing the ice. It took his weight but only where he was standing! 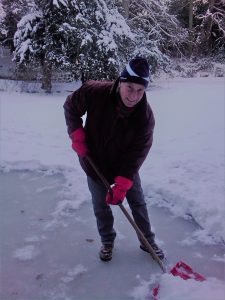 You can find out more from the web site for the www.royalcaledoniancurlingclub.org Click on clubs and locate East Linton