In pursuit of one of its major aims : 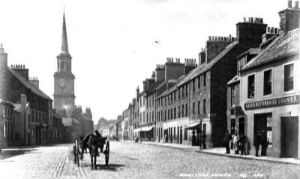 “To foster interest in the history and archaeology of Haddington and its environs through annual programmes of meetings with guest speakers, and outings both locally and further afield”.

The society puts together a ‘season’ of meetings on one Thursday of each month in Haddington Town House at 7.30 pm.

The site has recently been modernised and brought up to date. It is now on a new platform and can be accessed via both computers and Smart Phones. Those with any visual
difficulties should also have benefitted from the changes made. Many of you will probably have looked at the site in the past and will be pleased to learn that a significant amount of new information has been added over the last couple of months. It may be worth your while looking afresh.
For instance, new topics include:
1. The Radio Padre
2. Rudolf Franzel
3. Vaclav Jicha
4. Philip Burnell-Phillips
5. The crash at Beech Hill
6. The crash at Fernieness
7. The crash of a B-17 at Drem

Due to the Covid-19 pandemic all physical meetings were cancelled after Ruth Fyfe’s talk about the Glasgow overspill in February 2020. Our 2020 AGM business was postponed in April and was eventually communicated by email to all members in August. Talks resumed in December using Zoom and will continue using Zoom until at least April 2021 (details on the What’s On page)

Local storyteller, Tim Porteous kicked off our season of zoom talks on 3rd December. His topic “Is it true? -‘historical truth’ and the role of oral tradition” was a thought provoking discussion of memories of events and how they differ from person to person. History is usually recorded from the perspective of only a few people and can be biased for personal or political reasons. Stories handed down by oral tradition will change over time but are probably based on personal accounts from the time and will contain some basis of truth.

East Lothian Archaeologist Stephanie Leith presented the findings of recent work at St Martin’s Church, Haddington in “New light on an old Ruin” Using maps and results of various survey techniques combined with the excavations she described structures and paths no longer visible above ground and discussed the history of the church.

Jenni Morrison, an Associate of Addyman Archaeology, described the work being undertaken in Dunbar to renovated old disused buildings starting with Black Bull Close. The archaeology and history of the buildings was researched before renovation using traditional skills. The project involved many people from the local community and created an opportunity for apprentices to learn the various skills.

Fran Woodrow, one of East Lothian Council’s archivists, described the life of the 1st Marquess of Dalhousie using letters and other material from the “Coulston Papers”  This collection of papers is held in the Archive at the John Gray Centre in Haddington. The Marquess was a Scottish statesman who served as Governor-General of India from1848 to 1856. He was noted for introducing the policy that if any Indian ruler died without leaving a male heir his kingdom passed over to the British. The talk also explored his relationship with his wife Susan through their correspondence.

Professor Sir Geoff Palmer gave a thought provoking talk about “Scottish Caribbean Historical Connections” He explained that many Scots had made their fortunes by exploiting slaves particularly in Jamaica and that the repercussions of this time are still having an effect on society to this day.

East Lothian and World War Two: You may be interested in reading about East Lothian’s role in the Second World War. If so, please click on the following link and you will be taken to East Lothian at War, a website researched by Jack Tully Jackson, written and with additional research by David Haire and supported by your Society.

Summer Outing to Colstoun – Nineteen members were able to visit Colstoun on a lovely sunny morning on Friday 15th May 2016. The visit was judged a great success as we were shown round by a most accomplished guide, Ludovic Broun-Lindsay’s cousin, Cameron. Cameron was not only full of interesting facts and amusing annecdotes about the deeper recesses of the family tree and the objets d’art in the house, but was also keen to illustrate the efforts required of large estate owners nowadays to maintain and preserve their properties.

Treasure Tour of John Gray Centre – This attracted fourteen members and turned into a very stimulating and interesting visit. The group was shown some of the Museum’s star items and then taken to the map room, deep in the upper levels of the building and somewhere most of us had never been. I know from one correspondent that the visit stimulated two members to return for another look later. 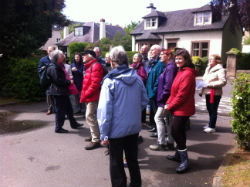 Guided tour of historical Haddington led by Jean MacKinnon. This attracted a much larger group than expected and all pronounced themselves mightily pleased by the experience. Well done Jean!

This year’s Gathering was held in the Town House on Saturday 28th February. We organised and hosted this get-together which saw thirteen societies mounting displays and sixty-four attending. In all there were sixteen speakers, fourteen giving short reports on their society’s projects and two, Joy Dodd and Sheena Irving, giving longer talks, entitled ‘Altars out: pulpits in” and ‘Presenting Cousland’s past” respectively. 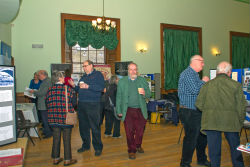 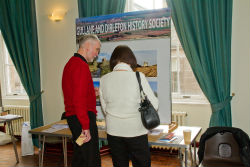 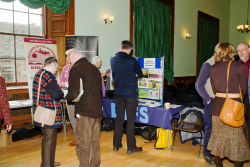 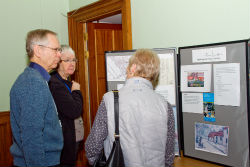 2016 Summer Outing to Arniston House, Midlothian. On Monday 16th May thirteen members travelled to this William Adam, Palladian style mansion house set in acres of beautiful parkland just 11 miles from Edinburgh. It has been home to the Dundas family for over 400 years and its present owner and her daughter took us on an excellent tour of the principal rooms in the house. After the tour, which included paintings by Raeburn, rooms restored from the bricks up after the ravages of dry rot and a lovely warm and comfortable library, we were treated to an excellent afternoon tea with cakes galore and floods of tea. After extracting ourselves reluctantly from the latter, we emerged into lovely sunshine and strolled across the newly mown lawns to investigate the sunken gardens and the stone remains from the old Scottish Parliament. It was another excellent History Society day out. 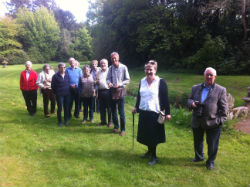 Twenty-two members headed south towards Kelso to visit this wonderful Adams house. The weather was less promising than usual but Bill timed the visit to perfection and the heaviest rain shower was viewed with disdain – from within! Fortified by coffee and a variety of buns, we were amusingly and informatively guided round the finer rooms in this ancient pile. It was the owner’s (the Earl of Haddington) misfortune and our gain that water ingress had necessitated a fair degree of re-decoration in two of the main public rooms and everything looked pristine and fresh. The ceilings and plasterwork were quite breathtaking and unusual pieces of furniture all made for plenty to see and remember. It was a grand day out. 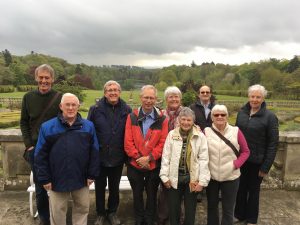 Some of our members at Mellerstain 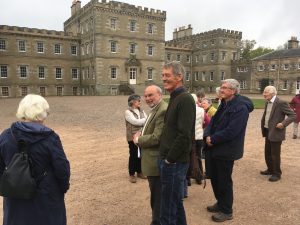 Jack Tully Jackson, our past  Honorary President, was long associated with recording the events and experiences of life in East Lothian during the 1939-45 war. David Haire, a past Convenor, has worked with Jack for nearly twenty-five years and has taken on responsibility for continuing the task. To extend the researcher’s reach and to provide anyone with an interest in this recent and important period of our country’s history, David has created a website. The website’s address is eastlothianatwar.co.uk

Should you have any information you could share for this project, please use the email contact at the bottom of each of the website’s pages. Thank you. So far the site has attracted new information from Malawi, Hamburg and Jerusalem as well as from more local sources.

Scotland’s Urban Past project (in association with HES)

Under the leadership of Eric Glendinning a team of the Society’s members is actively recording life in the Nungate in all its aspects in an area of Haddington which still retains its very own character. The team is recording long-term residents, examining old maps, collecting records and exploring the hints and clues found in paintings of the area. This project is intended to last from four to five years.